Laybuy said its system will be available for online purchases from Footasylum Plc, a British shoe and apparel retailer, starting Monday, and in the chain’s 70 stores in the U.K. later this year. The payment company has also signed up about 100 other U.K. merchants, Gary Rohloff, Laybuy’s co-founder and managing director, said in an interview.
The company was founded in 2016 by Rohloff, a veteran retail executive, and his son Alex Rohloff. It said it has 375,000 users in New Zealand and more than 3,750 online and physical stores offering its payment method. Laybuy is also available in Australia.

Laybuy, a New Zealand-based payment processing firm that allows customers to pay for purchases in installments, is launching in the U.K.

Laybuy said its system will be available for online purchases from Footasylum Plc, a British shoe and apparel retailer, starting Monday, and in the chain’s 70 stores in the U.K. later this year. The payment company has also signed up about 100 other U.K. merchants, Gary Rohloff, Laybuy’s co-founder and managing director, said in an interview.

Laybuy competes with Sweden’s Klarna Bank AB, which also lets consumers pay in installments for online purchases, as well as PayPal’s Credit product. Rohloff said it differentiates itself by not charging interest — the company only makes money on a commission the merchant pays — and by allowing consumers to use Laybuy in stores as well as online. The company takes payments in six weekly installments.

“When someone misses a payment with us, we just suspend the account so they can’t get into a debt spiral,” Rohloff said.

Laybuy said in a statement that merchants offering its installment option increase the likelihood customers will complete a purchase, boost the average value of transactions and draw more new customers. Laybuy charges the installments to a customer’s debit or credit card.

The company was founded in 2016 by Rohloff, a veteran retail executive, and his son Alex Rohloff. It said it has 375,000 users in New Zealand and more than 3,750 online and physical stores offering its payment method. Laybuy is also available in Australia.

Gary with his son, Alex

New Zealand-founded Laybuy is a buy-now-pay-later platform with its sights firmly set on growing internationally and becoming a ubiquitous global brand.

Stories about irresponsible lending and unsustainable personal debt are never far from the headlines these days, but Laybuy is doing things differently.

“We see ourselves as a lifestyle enabler,” the company’s co-founder and managing director, Gary Rohloff, told me recently when we sat down for a chat. “But we want to do it responsibly.

“That’s an important part of who we are as a business and the value set we have.” 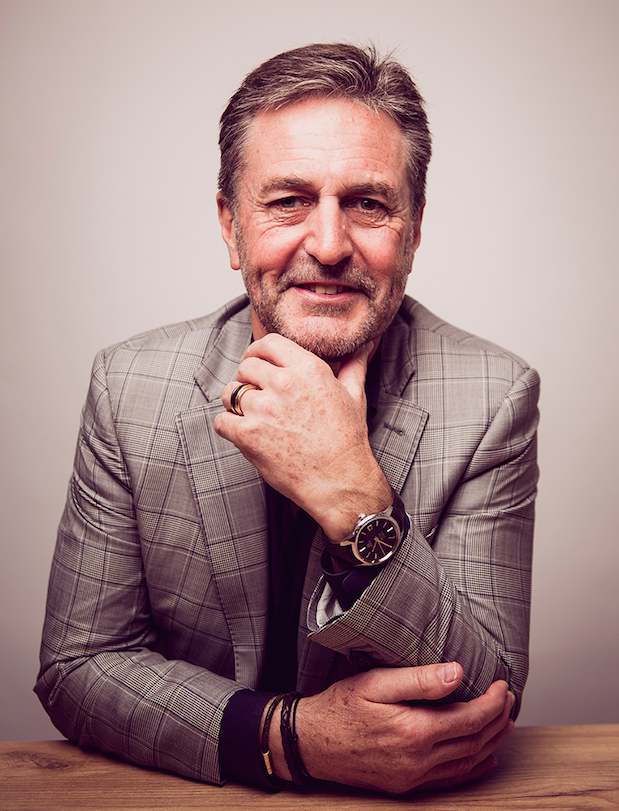 Gary and his wife have two sons aged 26 and 22, both of whom are involved in the business.

His experience as a father is part of what’s driving Laybuy’s ethical approach to buy-now-pay-later.

“I wouldn’t want our boys getting into unsustainable debt. And the values of our company are – we’re not going to set ourselves up to put other people into it either.”

How does Laybuy work? The platform’s available to use both in-store and online. It essentially allows shoppers to purchase goods or services and pay them off, to Laybuy, over a six-week period. The consumer gets what they paid for straight away and the credit is completely interest free.

On the merchant side of the transaction, businesses are paid within three days and Laybuy takes all the consumer credit and default risk, generating a small sales commission towards its revenues.

“Our platform is built by retailers, for retailers“

Laybuy is a perfect amalgamation of Gary’s professional experience, which saw him work in banking and finance for 20 years before moving into retail.

He told me: “At the beginning of 2000, late 1999, I was appointed CFO of New Zealand’s largest catalogue company, EziBuy. Within 12 months I was promoted to managing director.

“The retail bug had bitten me and I ran EziBuy for six and a half years.”

After EziBuy, Gary ran New Zealand’s biggest stationery business, Warehouse Stationery, for three and a half years, and then became CEO of footwear company Number One Shoes for the seven years leading up to Laybuy.

“Our platform is built by retailers, for retailers,” he explained. “I’m not a tech guy, but I understand retail. That’s what makes our platform work so well for merchants.”

“In late 2016, I decided to roll the dice and leave the corporate world. I had a dream – with my wife and our youngest son, who helped start the business – that we might be able to make our idea for Laybuy into a ubiquitous global brand.”

The launch followed earlier attempts to establish a similar platform during Gary’s time at EziBuy.

He said: “Back in the early 2000s, we thought we could do something similar for our customers in the catalogue business.

“The barrier at that point was cost, because we weren’t able to do the digital credit checking that we do today. So it would be very paper and people based.”

That’s no longer an obstacle, as Laybuy has integrated with Experian to run careful credit checks on consumers before they’re able to use the platform.

“We are very very committed to ensuring we’re not putting people into an unsustainable debt position. Our limits are appropriate to the credit score of the person, and we also ensure users can’t get into the debt spiral they’d get into with a credit card.

“No one’s doing what we’re doing up here. We are unique in this market“

“If someone doesn’t pay an installment we just suspend the account, so they don’t keep spending and getting themselves into trouble.”

I asked Gary about Laybuy’s expansion into the UK, and the difficulties he’s faced in bringing his successful business literally halfway across the world.

Laybuy launched in New Zealand in May 2017 and landed in Australia in August last year. It now boasts somewhere in the region of 500,000 customers across the whole of Australasia and offers access to more than 4,000 online or physical stores.

Gary told me: “Our strategy was always to dominate the New Zealand market, prove the portability by taking it into Australia, and as quick as we can come out to the UK.”

In Gary’s mind, the UK is the Golden Fleece of retail. “It’s a very sophisticated market,” he said. “But no one’s doing what we’re doing up here. We are unique in this market.

“The only difficulty here is that, I had a network across New Zealand and into Australia, from my retail experience down in that part of the world. Pretty easy to connect with.

“Coming up to this part of the world, I don’t have that same network. That’s the hardest part in a new market. Just knowing who to talk to.”

Laybuy’s centre of operations has effectively moved into London with Gary and his wife, both of whom are here on entrepreneur visas.

He said: “We’ve relocated to the city and we’ll be here for the foreseeable future as we drive our business across the UK and Europe.”

“The short-term plan is to establish our brand and presence in the UK and become a household name here,” Gary explained. “Our dream is to create a ubiquitous global brand, and to do that we need to roll out quickly, gain the confidence of consumers and retailers in the jurisdictions we want to go into.”

Once its foothold in the UK and Europe is firmly established, Gary said he’ll definitely be “looking further afield”.

“Understand the problem you’re trying to solve. If you can do that, it’s a very good start“

In such a short space of time, he’s turned Laybuy from a banked idea into one of the biggest success stories in Australasia’s retail and digital sectors.

I asked Gary what advice he’d have for any Bdaily readers looking to set up a company of their own in 2019.

“Understand the problem you’re trying to solve. If you can do that, it’s a very good start,” he said.

“Do your research. We spent four months in the research, planning and development phase of Laybuy prior to even starting the build of our platform. I think you’ve got to do your homework and understand what you’re trying to achieve.

“Finally, you’ve got to 100% believe and commit to what you’re doing. I’m in my late 50s. To leave the corporate world, put everything on the line and move to the other side of the world, you’ve got to be committed.

If you’ve not got the commitment, Gary said, you’re not going anywhere.

“You’ve got to have that belief.”