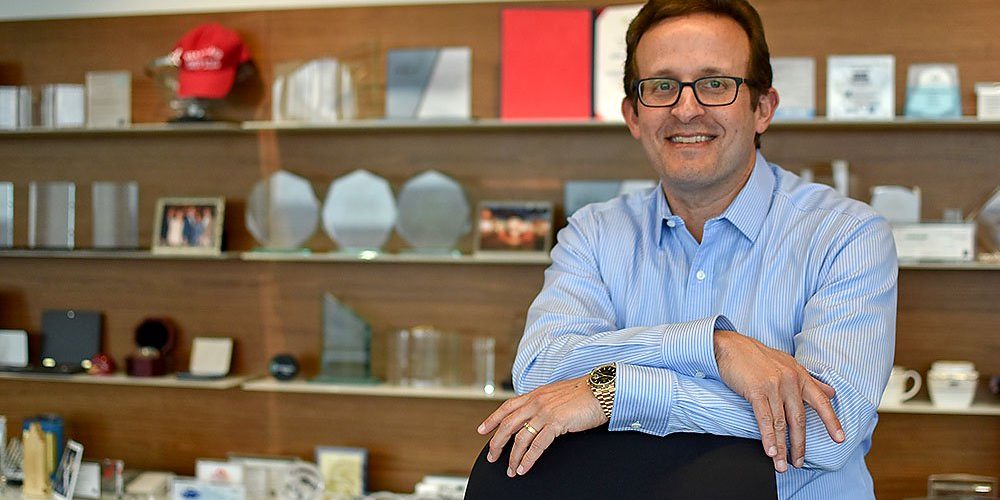 How Jeffrey Sloan Transformed Global Payments Into An Industry Heavyweight

“By making substantial human, technological and financial investments, we have become a leading worldwide provider of technology-enabled, software-driven solutions in a little over five short years,” Sloan said. “We have changed our industry rather than been changed by it. And we draw market leading talent from technology companies globally, rather than just from our peers or from legacy financial services companies.”

Please also watch in video: Global Payments CEO: Secret to Fast Growth | Mad Money | CNBC
The financial technology space has revolutionized how the world drops coin. As the space becomes more crowded, Jim Cramer sits down with the CEO of Global Payments to see if it could pay it forward. CNBC , Published on May 24, 2018.

How Jeffrey Sloan Transformed Global Payments Into An Industry Heavyweight

When Jeffrey Sloan became CEO of Global Payments (GPN), he knew big changes were in store for the payment technology and software solutions provider.

Sloan joined Global Payments as president in June 2010. He took the helm in 2013. He knew then it was crucial to revamp and refresh Global Payments’ business model to make it more competitive in a changing industry environment.

“By 2013, when I became CEO, we had been a part of the NYSE for more than 10 years,” he told IBD in an email interview. “But we were still more of a traditional legacy payment processor.” Sloan says this put Global Payments at enhanced risk for becoming a company whose products were more of a commodity not distinguishable from what rivals were offering. The payment services industry was also moving toward removing the middle man. This meant Global Payments’ services risked becoming obsolete.

“With the changing payments landscape, I wanted to transform us from just a payments company to a technology company selling distinctive and defensible payments technologies,” Sloan said. “To do that, we needed to have the right people with the right business model and the right culture.”

So Sloan, a veteran financial technology industry leader, hit the ground running. His strategy transformed Global Payments into an industry innovator and leader.

“By making substantial human, technological and financial investments, we have become a leading worldwide provider of technology-enabled, software-driven solutions in a little over five short years,” Sloan said. “We have changed our industry rather than been changed by it. And we draw market leading talent from technology companies globally, rather than just from our peers or from legacy financial services companies.”

Adjusted earnings per share have grown at a compound annual rate of 25%, according to the company.

Sloan attributes Global Payments’ strong performance to several factors, including its differentiated positioning in the market.

“Our model is uniquely positioned, and the key is balance across our strategies,” he said. “Key to our success is the diversity and distinctiveness of our model.

“First, we both own and partner with leading software companies.

“Second, we offer highly competitive (e-commerce) and omni solutions in more markets seamlessly than our competitors in the most attractive channels.

“And third, we provide these technologies increasingly into faster growth markets as a first mover.

“These attributes, combined with a singular focus on consistency of execution, have resulted in the performance we have exhibited.”

“He’s one of the most innovative leaders in the space,” Mihalos told IBD. “The best way to describe what he’s done is he’s taken what was a traditional payments company to a technology-oriented provider of payments. He was very quick to figure out that the payments and the software were going to be embedded as one and really shifted the direction of the company to prepare for that change in the payments landscape.”

Global Payments’ technologies, services and employee expertise enable the company to provide a broad range of solutions that allows its customers to accept all payment types and operate their businesses more efficiently across a variety of distribution channels in many markets around the world.

“It’s a market leader serving small and medium size businesses,” said Mihalos. “That’s its bread and butter. It’s managed to stay ahead by embracing technology, while a lot of its competitors have fallen behind, particularly banks. … Its technology is its edge to small- and medium- size businesses that generally can’t afford access to solutions that the larger merchants and retailers have.”

“He really brought a lot of innovation, and that has helped to make the company perform much better over the last several years since he’s been CEO,” Napoli told IBD. “The stock had been flat for several years before he took over as CEO. He changed the direction. He accelerated the trend toward more technology-driven payments and merchant acquiring and substantially reduced the commodity-like portions of the business. That lifted the entire organization and gave the employees and company a view that Global Payments was committed to investing in the right growth areas of merchant acquiring and would not be left behind.”

Sloan describes the key tenets of his growth and innovation strategy this way: “The world is increasingly specialized and defined by vertical market segmentation. We mitigate commoditization and disintermediation risk by selling value-added services into those distinctive markets. We target those verticals that have large target addressable markets, grow more quickly than the overall digital payments market, offer superior margin profiles, are multinational in scope and where we can own or partner with clear leaders in those spaces.”

“We look at acquisitions frequently, but only do a few at most in any given year,” Sloan said. “That’s because we focus on strategic fit, cultural compatibility and (lastly) financial returns. Very few potential partnerships make it all the way through all three.”

One Global Payments acquisition that stands out as a game changer is the company’s merger with Heartland Payment Systems, which closed in 2016.

“Without a doubt, our merger with Heartland transformed our company,” Sloan said. “While we had very good technology prior to that transaction, we were subscale in distribution in the United States, our home market and the largest payments market in the world. Heartland changed all that. Heartland significantly expanded our U.S. direct small and medium-sized merchant base by adding nearly 300,000 new merchants at the time.” The merger also added over 1,000 sales and support professionals, he adds.

Sloan’s strategy for Global Payments has been guided by a leadership philosophy focused on a few core principles.

“I think it is critical that any organization has a few clearly articulated objectives that translate well globally (so) our people can know what successful outcomes are, and what good behavior (and bad behavior) is,” Sloan said. “That’s the only way I believe you can effectively manage 11,000-plus people across 32 countries and eight primary languages.”

1. Emphasizing service to customers, colleagues and communities in which we live and work.
2. Taking personal accountability for our actions and results and helping our teammates be successful in their roles.
3. Helping our company to grow profitably.

Sloan, 51, has deep industry knowledge with 25 years of experience in financial technology. Before joining Global Payments, he was a partner and the worldwide head of the Financial Technology Group in New York for what was then Goldman Sachs & Co. and is now the Goldman Sachs Group (GS).

Sloan has changed careers three times since he began working in 1992. He’s learned some key leadership and life lessons from his experiences.

“In each instance, I asked myself whether the change would expand my skill set,” Sloan said. “I also asked what the reasonable worst outcome could possibly be if things didn’t work out. I have enough confidence that I was pretty sure things would generally be fine no matter what could foreseeably happen.”

“First, life is a details business,” he said. “Get the little things right and the big ones will follow.

“Second, we try to do things correctly all the time, not just once in a while.

“Third, winning is a habit; unfortunately so is losing.

“The latter two ideas are from Vince Lombardi in football; but I think they apply to the business world equally.

“Finally, facts matter. Face the facts, and you will be better off in the end. Hope is not a strategy.”

1. Learn as much as you can from each job. As long as you’re learning, you’re growing personally and professionally.
2. Take calculated risks.
3. Surround yourself with people who challenge and disagree with you.
4. Lead by example.

Overcame: The risk of becoming obsolete in a rapidly changing industry.

Lessons: “Take risks, but make sure they are knowing and informed risks. And then you will never really be poorly served regardless of the outcome.”